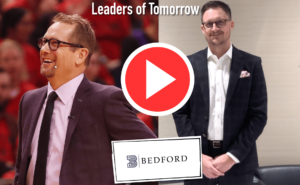 What can we learn about great leadership from Toronto Raptors coach Nick Nurse ? Watch this video to learn more.

Nurse’s success has prompted businesses, including ours, to look at what makes him such an effective leader and what we can all learn from his attributes in identifying and developing the great leaders of tomorrow:

Nurse’s rather unconventional path to the NBA is well documented. Spanning five countries and 15 teams over the last 30 years as a coach, Nurse took on experiences as a head coach and assistant coach in different leagues, where he built and turned around teams, creating shared belief with players from different cultures, languages and backgrounds. In short, he honed his craft.

Nurse hasnoted he approaches each situation as a learning opportunity to get better and is not concerned about the level he is coaching. Call it belief, commitment or confidence, but he enjoys the learning journey versus focusing on what he wants the end point to be.

Nurse embodies this philosophy of diverse perspective and experience. For example, when Raptors Assistant Coach Brittni Donaldson started with the Raptors, she was only the second female in the organization. Today, there are 14 women with the Raptors and Donaldson is one of 11 female assistant coaches in the NBA. Regarding Nurse, Donaldson told The Globe and Mail’s Rachel Brady, “Nick gives people different responsibilities and shifts people through different things. That’s what I really like and respect about Nick – he doesn’t pigeonhole his staff… He enables us to sharpen our tools in lots of different areas.”

Organizations typically focus on deep industry or functional experience over breadth of experience. For the leader of tomorrow, relying on deep functional and specific industry expertise will be less important than learning agility and the capability to leverage a broad “toolbox” of skills and experiences. Likewise, leaders who are “products” of this diverse development are more likely to foster similar development amongst their team, which is a catalytic force for driving team success. Nurse has clearly demonstrated this.

At various points throughout the 2018-19 season, Nurse left many fans scratching their heads at seemingly unprecedented plays he set up on the court. What makes this even more interesting in Nurse’s case is that he was a first-time head coach with a lot of critical “eyes” on his every move. Typically, in sports and business, this dynamic leads to an overly conservative approach.

His courage and penchant for taking calculated strategic risks was evident at numerous points, perhaps no more so than Game 2 of the NBA finals against the Golden State Warriors. When the team struggled late in the game, Nurse employed an unorthodox defensive strategy called ‘box-and-one defence’ designed to limit Warriors star guard Steph Curry.

Former NBA great and Golden State Warrior’s Head Coach Steve Kerr noted post-game that he had never send that play used) in the NBA. There was another notable example where Nurse developed a unique in-bound play based on something he had seen in a high school football game!

In order to create the “new maps” that will be required for success, leaders cannot be afraid of failing and must be given the latitude to be creative and truly innovative. In other words, do something that has not been seen before.

Professional sports, with its clear win-lose outcome, are far from the most empathic environments. But what happens when the coach/CEO can’t connect with the players/employees?

The business environment of today, is much like the fast-paced, athletic game of basketball, where the lens in which we categorize capability is through fast-twitch muscle reactions. How fast do you respond to an email (loose ball), move from strategy to action (drive to the rim), how productive are you (how may points do you score relative to shots taken) are all critical aspects of modern-day business (basketball). But in a world where everything is fast, empathy is dependent on slowing down, being in the moment, truly connecting with the people around you.

Empathy does not mean a push-over. Nurse is not afraid to challenge his team. He will bench players who aren’t performing.  Or call out mistakes, even publicly, when needed. But his interpersonal skills are excellent. He relates to his players and he ensures he has a deep understanding of the unique nuances of what drives and motivates each individual player and shows them how their individual contribution makes the total team stronger. As a result the team is stronger than the individual components that make it up.

One of the biggest keys to success for the leaders of tomorrow will be their ability to make sincere emotional connections within this fast-twitch world. Followership, engagement and results will follow.

Under Nurse, the Raptors have continued to define their organization as one of the best development teams in the NBA, employing state-of-the-art technology to give players instant feedback on key aspects of their game.

For the best athletes and employees to get better and hone their craft, organizational leadership must be truly invested in providing the platform and opportunity to develop in order to reap results. Furthermore, those committed to honing their craft tend to be drawn towards and feed off of others with the same focus. Fail to recognize this and you will end up with a disparate group of sub-par players.

But it is not only about investing in development. Kevin Routledge, Chairman of the British Basketball League, noted in a Guardian article that during much of Nurse’s time coaching in Britain, “the players knew he was for them. Ultimately, it’s about how much they buy into a coaching philosophy… getting five guys out there, playing for each other.”

At all levels of leadership, the core tenets are the same. Development, collaboration, culture and teamwork are the hallmarks of the 21st century organization. But they have always been superseded by results. The leader of the tomorrow will realize that without true mastery of these imperatives at the core of all they do, results will be temporary at best.

Darren Raycroft is a partner with The Bedford Consulting Group, an executive search and leadership development consulting firm headquartered in Toronto. Find him at https://www.linkedin.com/in/darrenraycroft/.