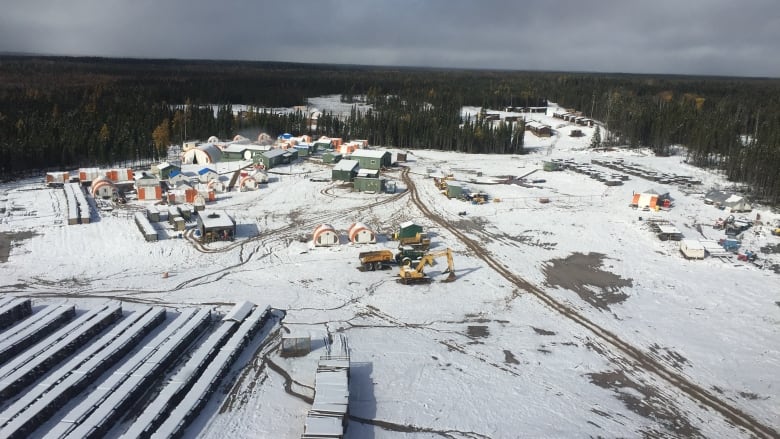 The top paid mining CEO in 2017 was Lourenco Goncalves of Cliffs Natural Resources, according to the Bedford Consulting Group’s annual report on compensation in the mining industry.

Cliffs may be best known in northern Ontario as the company that sold its holding in the Ring of Fire in 2015 over the slow pace of development in the chromite deposit. It sold those claims to Noront Resources.

Galati says compensation is a good indicator of how well a company is doing.

None of Vale’s or Glencore’s executives made the top five lists in their categories.

Bedford’s Frank Galati says executive compensation reflects the health of the company, and with Glencore, it shows some decline.

“On the mining side of their business, they’ve got a lot of mines that are ending their life, and that’s really the bulk of it,” he said. “They’re really not as efficient or effective as they used to be.”

However, the chair of Glencore’s board, Anthony Hayward was the top in his category earning $1,939,316.

With files from Kate Rutherford

Webinar 3 on May 28: Tech CEO’s on How to Build Viability in the Covid Crisis
Webinar 2 on May 21: Tech CEO’s on How to Build Momentum in the Covid Crisis
Integrating New Leaders with Virtual Onboarding
Webinar 1 on May 14: Tech CEO’s on How to Deliver Value in the COVID Crisis
Leading with Empathy: A discussion with business psychologist Craig Dowden, Ph.D.
Employee Engagement – During and Beyond COVID-19
Teal & Co. Forms Strategic Partnership with Bedford Consulting Group
Turning Disruption into Innovation: How to Lead Through COVID-19
Why business leaders should look to Nick Nurse if they want to score big
International Women’s Day: A Letter to My Children
PRESS RELEASE: Nuclear Power Executive Ian Rowley to Join Bedford Consulting Group
Mastering Manufacturing in North America
Bedford Group TRANSEARCH Recruits Top Quality Executive to Getinge Group
It’s Time to Close the Behavioural Skills Gap
The Bedford Group and SalesChoice Inc. Continue Strategic Partnership
The Transformational Leadership Series: Rising Through The Ranks
THE CFO EVOLUTION: IDENTIFYING EMERGING ARTIFICIAL INTELLEGINCE TO GIVE YOUR COMPANY A COMPETITIVE EDGE
The Leadership Shift: The Effect of Millennials Moving into Senior Positions
Inaugural golf tournament raises funds for YMP scholarships
How Companies Can Combine Intelligent Technologies and Learning Strategies To Accelerate Skills Acquisition and Be More Competitive
The Time Is Now for Executives to Embrace and Lead a Culture Aligned with Intrapreneurship
How Startups in Smaller Markets Can Attract Top Talent
Announcing the release of Bedford resource’s 5th annual mining industry report of board and executive compensation
The 99% Club: What You Can Learn From Glassdoor’s Winning CEOs
Leadership Qualities Needed for the Future of Work
Building An Employer Brand That Attracts And Retains Great Talent
Always Hiring: The Criticality of Building AND Nurturing Talent Pipelines
The Bedford Group & SalesChoice Inc. Develop Strategic Alliance To Help Clients Build ‘The Organization Of The Future’
Leathwaite’s 2019 Global HR Leadership Survey
Is Your C-Suite Ready for the AI Revolution?
Keys to success in your first CEO role
What Every C-Suite Leader Must Know About AI Readiness.
The Essential Interview Questions Selection Committees, CEOs, and Heads of Talent Should Be Asking An Executive Search Firm
Why The Candidate Experience Matters More Than Ever—And How To Improve It
Top 3 Recruitment Trends for 2019
The New Role of the CHRO in the Age of Disruption
How to Recruit Top Talent When They’re Not Looking for a Career Move
Follow these 5 steps to future-proof your career
The Bedford Consulting Group Welcomes Stephen Diotte as Partner
Cannabis, Succession, & The War For Talent: Just 3 Reasons Why You Need To Rethink The CHRO
3 Helpful Interview Tips Of CEOs Who Can Tell A Good Story
A 3-Step Action Plan For Evolving CEOs
4 Reasons Why New CEOs Must Be Pragmatic & Mindful In Tandem
Bedford Recruits Top Executive for RAMPF Composite Solutions
Bedford Recruits Top Executive for ABC Group
Welcome David MacPherson to Bedford Group
Leading the Charge for Diversity and Inclusion
A Leader from Within: Revera President & CEO Tom Wellner
The AI Revolution: Fast Rising To The Top Of The C-Suite Agenda
Bedford Recruits Two Top MedTech Executives for Getinge Group
Upcoming CEO Roundtable Event – May 30 2018 at 8:00AM
How to Build the Best Leaders
The Globe and Mail: Hold off on the Touchdown Celebration While You’re Still on the One-Yard Line
Introducing The Mining Monitor newsletter
RESILIENCE IN A SEA OF CHANGE: Ed Gudaitis, GM – Canada, Allergan
CIM Awards
BEDFORD’S SPRING EXECUTIVE HUMAN RESOURCES ROUNDTABLES
Upcoming HR Executive Roundtables
THE BEDFORD GROUP AND RHR INTERNATIONAL PRESENT THE NEXT ROUND OF THE HUMAN RESOURCES EXECUTIVE ROUNDTABLE SERIES!
Social media and hyper connectivity
Celebrating Exceptional Achievement Among Young Mining Leaders in Canada
The right time to challenge the status quo
Bedford and CIM are proud to announce its 5th annual young mining leaders award
Bedford is proud to announce the official release of John Burdett’s new book – team: align, build, connect & develop
The difference between executive search and contingent recruiters
Bedford’s 6th annual mining industry report of board and executive compensation
No time for heroes
THE ODD COUPLE: RETHINKING HR & CEO PARTNERSHIPS
Upcoming CEO Roundtables
Future-Proof Your Business With A Succession Plan